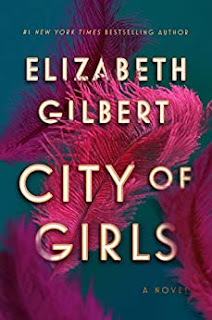 `After a certain age we are all walking around this world in bodies made of secrets and shame and sorrow and old, unhealed injuries. Our hearts grow sore and misshapen around all this pain - yet somehow, still, we carry on`.
In a memoir-like account, Vivian Morris is sharing her life with the daughter of the man who was the big love of her life. A love that, compared to the many encounters with men Vivian had, was not physical but built through the power of shared stories and emotions.
City of Girls, the latest by the fantastic storyteller Elizabeth Gilbert, doesn´t have a clear geography. Most of the action of the book takes place in NYC, but it reached the girls everywhere. Girls and women that for ages were condoned for their decisions of: not getting married, not having children, having sex, being free...Young talented women don´t have to become housewives.
In many respects, Vivian is thinking well beyond her times - the action of the book starts in the 1940s - but not necessarily surprinsingly her way of being and life - ´Sleeping with men - lots of men - that´s more or less my way of life´ - still can be problematic and easily considered socially inacceptable in our 21st century as well. The hypocrisy of the society openly and harshly condemning and chasing women for ´bad´ behavior but kindly excusing men is apparently here to stay.
Green and naive at the beginning of the story, Vivian grows into an independent soul, able to assume and be proud of her choices and life philosophy. ´(...) the world ain´t straight. People have a certain nature, and that´s just how it goes. And things happen to people - things that are beyond their control´.
People will be much happier with themselves if they will stop chasing other people for what they are. Avoiding to utter judgements against what other are doing, they will eventually have more time to focus to fix their own unhappiness. Accepting people as they are, their personal choices of living their life included, will make human relationships better.
For the reader, City of Girls is another display of beautiful writing by Elizabeth Gilbert. The story in all its elements - from the characters to the dialogues and the background documentation - is charming and once you start reading you will abandon everything else you were doing before until the story is over.
What will Elizabeth Gilbert write about next? Can´t wait to read her new book...

Posted by WildWritingLife at 10 April